We had a target of completing the the Ashchurch Stables reclamation job by the end of September and on a crisp sunny day the job was done. In total 12,000 bricks were recovered and 40 tons of hardcore. What a superb effort. 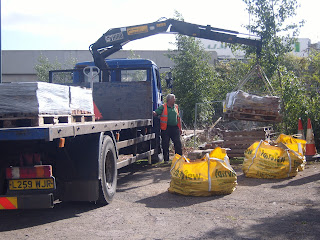 All of this could not be achieved without the the help of Paul and the Tecton Lorry. He literally went the extra mile yesterday to bring 3 full loads back to Broadway. It was far beyond the call of duty as he missed out on his Rugby Club party to finish the job on time. We owe you several pints Paul! 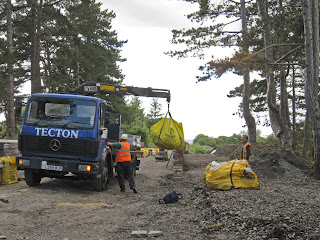 Here we see the final loads being picked up at Ashchurch and dropped off at Broadway. 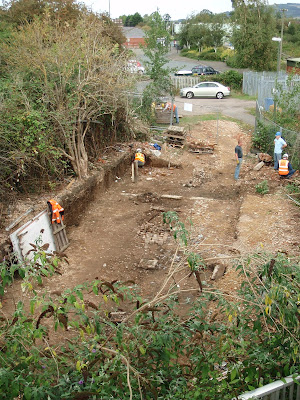 And finally the job was done. Thanks to Bob Jones and Andy Protherough who have toiled away over the past 10 weeks to keep the job on track, all the volunteers who did the Wednesday shifts, and finally to the gang who went over today to make sure the job was completed on time. Now does anyone want a mountain moving! 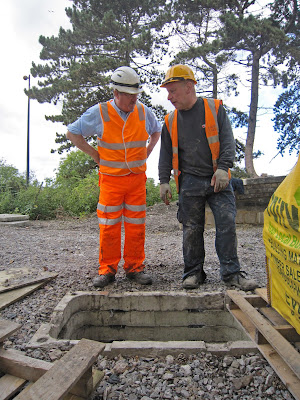 Back at Broadway I had a concern that having had some torrential rain earlier in the week, that the central track drain might not be clearing itself down into the culvert which goes under the Evesham Road. In order to check this out each catchpit had to be cleaned out (again) to ensure there was a good flow going through it. After good deal of perspiration all the of the drains were cleared and flush through with several barrels full of water.

Here new volunteer Terry Chapman and Clive, who both sorted the job out. Terry works as Project Manger for Invensis Rail (Westinghouse as was ) as a proper job, and what he doesn't know about signalling isn't worth knowing!


On other fronts Jo and Roger persevered with the K6 refurbishment, with the tedious task of locating glass and frames in the windows now well under way.

At the other end of the site George Forrest came along to fit a new flange on the top of one of the lampposts. I am as an engine driver and and  engineer I am sure George would have better things to do on Saturday, but was happy to help us out and therein lies the great spirit of the volunteers on our railway.

Brick cleaning went on today the brick cleaning lads undaunted by the sea of bricks awaiting their attention.
Posted by Bill at 08:09

Thank you to Paul from Tecton for all his efforts on our behalf. He made a total of ten round trips over a period of a month, between Ashchurch & Broadway to transport all the bricks free of charge for us.

Paul also made several other visits to advise the best placement of the palleted and bagged bricks on site so the recovery operation went smoothly.

Thanks to a great supported of our project.

The picture of the neat site left behind makes a very good impression - I think the site owner will be pleased.
On the other hand, Broadway is now bulging with Ashchurch bricks - an excellent effort all round. Congratulations to all concerned!

Frances and I popped in on Friday evening after our usual gardening day at Toddington. In the gathering gloom we were impressed by what has been done since the last time we were there - the blog and pix are great [ keep it going !! ] but there is nothing like actually seeing the progress. Well done all ! Chris Crump