It seems difficult to believe it's the first of September when we seem to have had so little Summer. However today wasn't too bad and it turned positively sunny in the afternoon. Eight Volunteers were in action at Broadway and 2 at Ashchurch.

It was a day of general house keeping and tidying up at Broadway. The old Station foundation plot had suffered, with the wet weather generating loads of weeds. Dave Bowie and Steve Bucknall set too and by the end of the day things were looking a lot better. I even managed to put  some new information signs up and it's looking a bit more cared for!

Two brick cleaning gangs were in operation - Robin, and Bob persevered with  cleaning the Wisley blues, whilst Chris and David had a go at the Ashchurch reds, some of which are now on site. See Friday's report.


The main feature of the day was probably the start of the next phase of re furbishing the the K6 Telephone Box.  Jo and Roger were in action and I've asked Jo to prepare a K6 50/50 Club Report.

The toughest assignment of the day was probably the digging out of 4 inspection holes to locate the mains power supply cable which runs behind the old platform 2 wall.  The cable needs relocating in order that we can safely dig out the footings for platform 2. New recruit Terry Chapman drew the short straw on this one, but was more than up to the job which was completed  well before the end of the day. This seemed a bit unfair for a first day task, particularly as Terry brought in some birthday cake to share with the lads. I hope he'll come back for some more punishment! 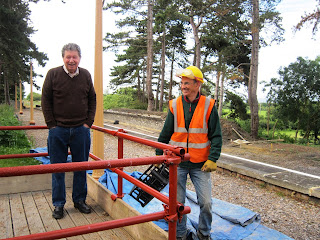 We had a great number of visitors today and the viewing platform is proving very popular. Please come along and try it out for yourself. 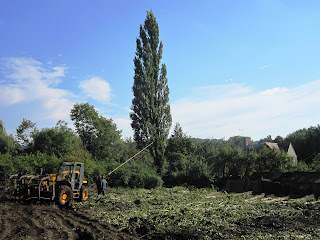 Finally there was some interesting tree felling and ground work clearance going on to the east of the Station Driveway. It struck us as to what a very useful space it would be for the Railway. Now there's food for thought? 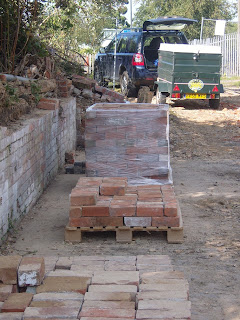 Bob Jones and Andy Protherough kept the Ashchurch brick reclamation on course.I know Bob and Andy feel as if they're ploughing a lone furrow on a Saturday, but you are doing a great job lads. 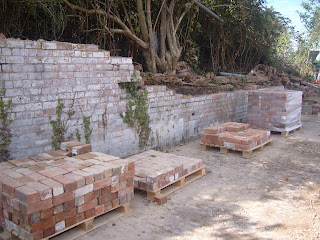 Whose is the land behind the garage?