Saturday 25th August - And then the Rain Came

A select band turn up today - all the activity of the previous 3 days had taken its toll. Nevertheless there was some final tidying up to do and  between the showers, 7 Volunteers set to with a will. We took the opportunity to clear several years worth of  old branches from the Driveway's eastern tree line. This was added to the waste from the trees that were felled during the week and 2 glorious bonfires were lit. There was a good deal of competition to among the troops as to which fire burned longest and brightest. I have to say it was a draw. 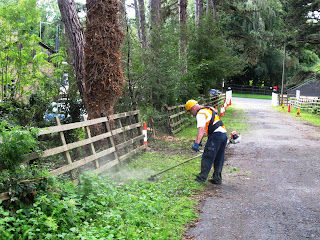 In the course of clearing the driveway an effort was made to reconstitute the GWR boundary line, with Dave B erecting some posts and rails. In addition Clive got the strimmer going and we ended up with a very tidy driveway, just before the heavens opened!. 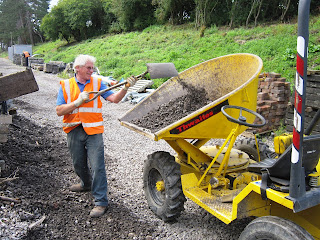 Finally John C and Jo drew the short straw to do some filling and  levelling off of the infill behind 1B. This required two dumper loads of ballast, which, to the detriment of their backs they loaded by hand. However the finished  article looked excellent. Where's the horse liniment! 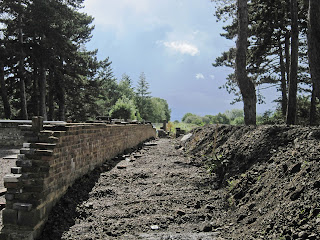 As an extra  -here is platform 2A with a  thunder storm approaching from the south.


I am going to do a separate post for Aschurch covering Wednesday and today.

Hello Bill,
A fantastic blog and excellant efforts by all the team at Broadway.
I wondered - Is a general list roughly sequencing all the events still to be carried out on site something you can share. For example you rarely mention when the Northern end of Platform 1 would be started and it would be interesting to understand the general sequencing plan of work on platform 2, signal boxes, buildings etc. etc. (I appreciate funds are a major influencing factor in this).
Kind Regards Rob T

Seeing the roaring fire in this blog instalment prompts me to ask: Is there any point in saving, or at least earmarking, on-site flammable material suitable for a bonfire as the centrepiece of a fund-raising event at the station site on the first weekend in November?

I am away for a couple od days- will respond when i get back!
Bill