A super turnout of Volunteers today - 21 in total. There were three main jobs going on and great progress was made on all of them. 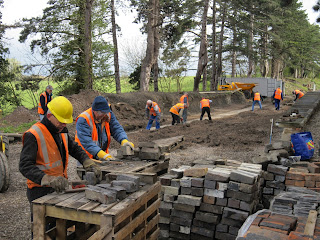 The new 2A foundation had hardened up and the team were able to mark up the 7m line for the block work. Then a Trojan effort began to get all of the 600 blocks lined up for work to commence next Wednesday.Here we see the initial 2A tidy up going on in the background. In the foreground Robin and Mike are cleaning up the Taunton bricks, ready for the 2A wall. 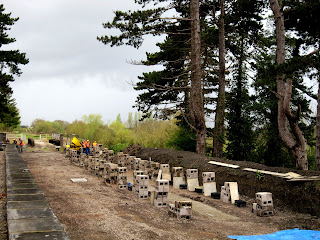 Here we see the end-of-day state of play along 2A. It makes my muscle ache just to contemplate the amount of effort that went into this task.   Have a close look at the attention to detail. The Worcester College Students will be able to get stuck in next week - all the preparation has been done!

On the other side of the track something a bit special was going on also! Not only did the final coping slabs get laid on 1A but as if by magic 4 lampposts with all of their draw strings in place were erected! 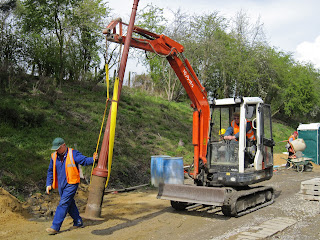 Here Lamppost no 2 gets walked along the trackbed. It brings a new meaning to leaning on the lamppost!... 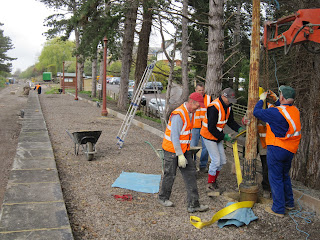 Here lamppost no 4 goes in - what an achievement! It brings a new dimension to 1A. Please come and see it on the Open Evening.(They will be painted by then!)

The third task and equally hard work was replacing the fencing on the Childswickham Road Bridge. Unfortunately our cameraman did not get that far but I will put that right next week. Sorry Bob, Rod Gord and co. 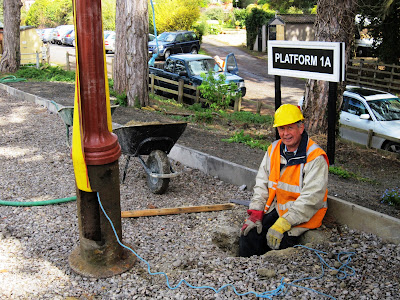 Finally, Jo comes up with brilliant photographs each week and this was my favourite of this weeks batch. Peter is usually getting us out of holes - its unusual to see him in one!
Posted by Bill at 20:43

Wonderful progress as usual :-) A question springs to mind from looking at the pictures.

What will be at the back of platform 1A to stop passengers falling over the edge?! Will it be a wall or a fence?

It's great to see the lampposts going in too. I just hope they stay there!

In GWR and BR days it would have been a metal fence, so I guess the team will do their best to recreate that. However, some stations did have Cotswold stone walls but Broadway, as far as memory and photographic evidence suggests, had a standard GWR black painted fence. Some fencing was painted cream in WR days.

We are trying to source some GWR spear fencing.
Bill

Thanks for the responses about how the back of platform 1 will be finished off. Something else I meant to ask - it was late when I typed my previous comment! - is how many lampposts do you have "in stock", how many more do you have to obtain, and where do they come from? Can you get replicas made if there aren't enough around? Finally, are the ones in the pictures originals and if so, where did they come from?

Has anyone made enquiries as to what is happening to all the railings on the road bridge in Evesham which is being replaced?They are not exactly spear head but if the price is right!!

Nigel,
We have a few more lamppost "in stock" and have source for some more at a price.
Graham,
I have an eye on the Evesham bridge fence and have a contact.

Thanks to all for interest.
Bill

Bill,
The station at henley in Arden is of a similar design to broadway, and is currently all boarded up, it would be good if it could be relocated and used again for the purpose it was built for!!!!

Andy,
I'm on the case, trying to establish what the existing owner wants to do with it.

That station isn't going anywhere! The owner has plans to convert it for office use and had planning permission to do so. The owner just got that permission extended. See

planning application which has a reference to the original application.

Re the fencing at Broadway station.
My photo shows it was spear fencing, painted black as already suggested.
Hope this link works:
http://www.panoramio.com/photo/70628119

They are altering Henley-in-Arden station to become two storey offices.

that is a real pity with regards to Henley station as it is in original condition and likely to be wrecked- or can we at least obtain the canopy?

NR see determined to wreck the heritage parts of the North Warwicks..... we need to salvage as much as poss due to it being historically effectively a continuation of our line!