Well what a difference 3 days make. At Taunton on Wednesday the lads were having to take shelter from the heat of the sun, and by Saturday they were having to where top coats and move around to keep warm! The good old British Weather!

10 Volunteers were on site. The two notable exercises were the continuance  of the corbelling on 1B and the clearance of a culvert beyond the Childswickham Bridge. 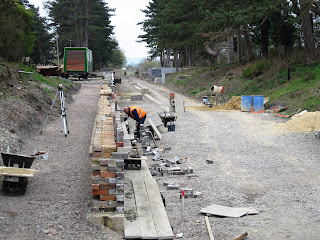 Here is a particularly good view of 1B which shows the final work in progress, but importantly shows the gentle curve of the whole of platform 1. You tend not to notice it when building it in sections, but you can see it clearly with 1A in the distance. I'm not quite sure where Jo was suspended from when he took this shot!

At the southern end of the site we had been asked to clear the vegetation around a culvert beyond Childswickham Bridge and Andy Protherough set to and did just that!

Andy also donned wellies and cleared out some of the larger

stones that were blocking the flow of water. Afterwards the level of water flowing was 1 1/2 " lower than before. What a great job! Let me say also Andy did the work with great care in regard to not disturbing nesting birds. 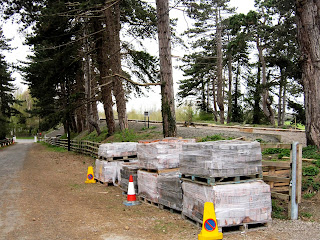 In other Areas John B and self set a new gazebo at Toddington so that our great supporter Joyce PeInfold can get her Broadway sales table in operation for in time for the Easter break. Please call in by and see her if you can.


Last but not least, Robin  and Vic persevered with the brick cleaning - the pile of bricks for their treatment never gets less - here is the Taunton lot chaps!
Posted by Bill at 10:35

I climbed up onto Robin's brick cleaning table :)

It's made out of three old pallets and very wobbly, but worth it for that special shot for our blog watchers!

Looks like you have a Health & Safety issue here. Have you done a documented risk assessment on the use of the table for this purpose!!.

At least it's better than where I thought Jo might have been - in Dot's bucket!!