A cold day with the prospect of snow understandably reduced the Volunteer contingent to a hardy group of eight. Nevertheless, a couple of key objectives were met and the troops were at least able to bask in the glow of some jobs well done! 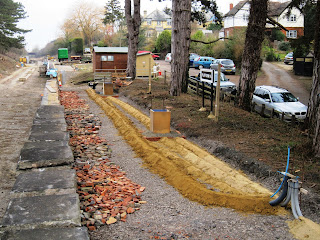 We are mounting a final push on getting 1A completed and this will happen Tuesday, Wednesday and Thursday of next week  As precursor to that the lamp post ducting and water supply ducting needed to be installed. It looks a pretty neat job to me, thanks to John C and Steve B.

In the car park the home fires were burning and it was no effort for me to hover around the bonfires feeding them with the branches lopped by the chainsaw gang. It was the right place to be on such a cold day!


The Broadway Area Group are conscious that in clearing the undergrowth, wayward saplings and small trees we are depriving the local bird population of some of its nesting sites. As a group we have an inherent conservation ethos and this extends to stewardship of the areas of  land we are responsible for. To this end,  Volunteer Dave Bowie has taken time out to source and build a variety of nesting boxes - 10 in all and has mounted them in suitable places along the footpath in the car park.

We would like to increase the number of boxes and if you would like to sponsor a box then a donation of £9 (using the donation button) will buy and maintain a box.

Lastly, a few weeks ago, Jo took a clip of the troops hand cranking the dumper and the jubilation when it was successful. Jo spotted this YouTube clip (A King Tiger by the Tail) of similar, muted jubilation, but on a slightly grander scale! A bit like cranking Dot by hand!

hi, love the blog, can't wait to read latest news. will 1A be fully complete or do retaining rear walls need to be built.
what is the next step, platform 2 or new buildings and when will the signal box be commnenced.
sorry for all the questions but this is the most interesting project to read about.
keep up the brilliant work.

The You Tube clip with its Maybach Engines has a tenuous link the the G&WR in its BR(W) days the Hymech's, Warship's and Western's all had Maybach Engines

Great progress with 1A

Thanks for the positive feedback. I will report some more detail on the next steps at Broadway in a week or so.