Sorry for the delay in making the post - but it's worth it!  As a regular follower you will have picked up on the fact that there has been a concern about the stability of the embankment adjacent to, what we are calling, Platform 1B. We considered the various options to solving the problem and have identified a good solution, which requires reinforced footing along the length of the problem area - 40+ metres. We are starting this job next Monday. In preparation for the trench digging Gord. and Peter pegged out the line of the trench. Unfortunately it follows the path of the redundant side drain and in order to preserve the concrete blocks within the  drain, an in flight decision was made to dig out the blocks by hand! It is this task I am describing as a Herculean effort. Lifting and shifting these blocks is one monumental task - they are so heavy and awkward, particularly coming out of sodden ground. 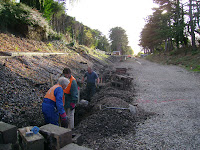 Here Chris, David and Andy are removing the blocks to be subsequently moved by Rod and Terry and stacked farther down the track. These will then be used as part of the reinforced footing/wall. I know I have said it before and I will say it again - I take my hat off to them - It is not a task I would have asked them to do - I would have let the blocks take their chance with the JCB, but they decided to do it by hand, to preserve the blocks - brilliant! 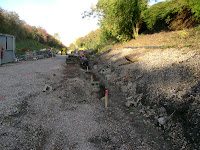 They were under threat from Gord. if they disturbed the trench markers and here we see at the end of the day the line to be taken by the JCB next Monday - the jobs half done Steve W! 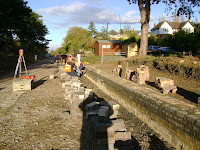 At the other end of the site work continued on building the Platform 1A Wall. A superb 3 courses of bricks were laid by the Construction Gang. If the weather remains kind to us over the next month the 1A Wall will be finished. It only remains for us to find the funds to build the rear gabion wall and then complete the infill and we will have a proper platform to finish off. What a milestone that will be! Here are the gang finishing off the end of the three courses, all level and true as the laser level in the background will confirm! They even found time at the end of the day to start work on the southern extension to the the main Platform 1. 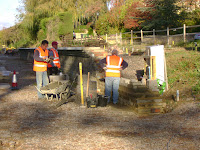 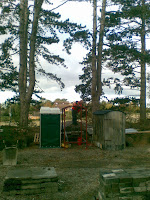 Finally the Lamp Huts Got a coat of bitumen black on the roofs which takes them another step nearer to completion.Cheers Ken!

Thanks to Peter for the end of day photos.
Posted by Bill at 10:05

Erm...hate to say it, but given the problems further down the line, is removing drainage a good thing?

Its a good point, but a new drain will be put down the centre of the trackbed and drains channeled through the platform foundation into soakaways by the catchpits.

Thanks Bill for post. Interesting as ever and I now know what a Gabion Wall is thanks to Wikopedia

I did know what a gabion was (I thought) but you say you have to make it. I thought one bought these things as they are essentially a wire cage filled with stones. These surely have to be made professionally do they not? Perhaps you are just referring to making the wall as opposed to the stuff to make it with.

Forgive the question, I am a bit thick, mind. I am anonymous because my Google sign in isn't working for some reason. Regards, HowardGWR.

My understanding is that you buy the constructed metal framework and then fill it with whatever material.

Being Broadway, Cotswold Stone would be the obvious choice. In fact, around here, when ordering 'hardcore', Cotswold Stone 'scalpings' typically gets delivered. Which is anything from 'dust' to 30-40mm.