An action packed day with 15 volunteers present and correct. I have to say Platform 1A seems to be going up before my eyes. Three teams were in action on it today - One on the north end, one on the south and a great support team shifting materials around.

Whilst this was going on Gordon Wood and Andy Smith (a welcome visitor from the P.Way Gang) started work on clearing the northern end of the planned car park. This is a daunting task by anyones standards as there is so much vegetation, rubble and general c**p it will take many 100's of man hours to get it anywhere near sorted, before proper levelling, drainage and top surface can be considered. 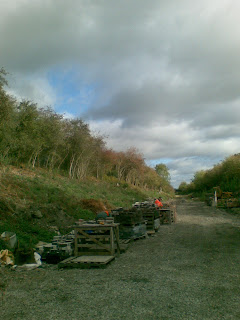 At the other end of the site we should not forget the brick cleaning gang. None of the brick laying would happen without their efforts.
Last but not least, Steve B took a trip with Richard and the Fairview Lorry to retrieve  a platform trolley given to the Broadway Group by Bryan Merrett and his colleagues for us to use  at Broadway. It looks as though it will need a major refurb. but when finished we hope to find it a temporary resting place in the Good Shed at Broadway. Steve also retrieved 7 lamp post from Winchcombe, some of which we will  installed on 1A before too long. Watch this space as they say!
Talking of old artifacts, here is the Gloucestershire/Worcestershire boundary marker we retrieved. Its up for a make over shortly. 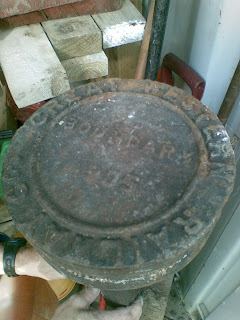 My Foreign Correspondent (Peter H) has filed his report! and here are couple of good shots:-
This picture already has a whiff of steam about it - with the Evesham Road Bridge abutment in the background it takes little imagination to visualise Earl of Mount Edgcumbe shimmering here with a south bound 8 coach, chocolate and cream rake bound for Cheltenham.
And finally that bloke from Fairview is at it again! Here unloading 7 lampposts pinched from Winchcombe. Thanks Richard and a big thank you to Fairview Trading who help us out at every turn and are so supportive to the Project! 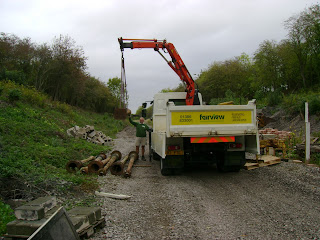 Are you actually going to join up 1 and 1A or will there still be a gap left for the time being?

Nigel,
No there will be a gap until all the major work is finished. However to get the correct line of the curve from 1 to 1A we have put a line through and completing another 3 metres of Platform 1. Sorry this is poor explanation, but it would make sense if you saw it!!!
Bill

Brilliant about the lamp posts, but make sure you keep them well out of sight, the K&ESR lost some of theirs to scrap metal thieves.

Just a thought guys .... this is a public website. The folks we worry about can read it too. Be careful what you say.