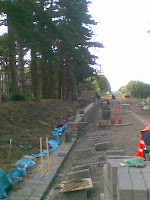 14 troops on parade today, determined to make the best of September sunshine. The platform 1A wall had the lion's share of the volunteers attention and great progress was made on laying further concrete blocks. 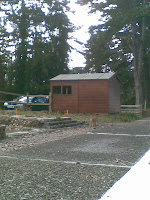 The Broadway Shed as it's now known now looks like new. Terry came in early to give it a coat of Ronseal and it looks very good. Clive persevered with the ground work around the shed and a window was replaced. Marguerite will be very pleased with it. Please come along this Saturday and have a look at the wide range of items that she is selling, the money from which add to the Broadway funds. Every little helps as they say on that telly ad!

We had  an experimental visit from Graham Smith and his beautiful Rouetmaster double decker bus. What a classic it is and in lovely condition. Graham has offered to run some "site" seeing trips from Broadway Village and Toddington next season so that people can see the progress being made. Graham who is "local" and a fountain of local information and we are pleased to have him on board as a supporter. 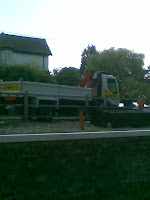 Fairview came up trumps again by collecting the final load of wooden sleepers from Stanton. Richard with Steve B  got them unloaded ready for use.

And saving the best till last the mess hut portakibin was moved across the trackbed to a new resting place. It was moved with its electrical umbilical cord intact. Peter and Gordon (could be of the sixties pop fame!) slogged all day to assist Graham Morrison and his JCB in achieving a first class result. This will now allow us to do the preparation ground work and landscaping to allow Platform 1B to proceed.

Finally thanks to Malcolm Walker and Neil Carr for coming along to review the siting of the signal box. we now have an agreement as to where it should go and the general ground work requirements.


Thanks to everyone who paid us a visit today. Your interest keeps us going and gives us warm feeling about the future of Broadway Station.

I am out of circulation for a week but will enjoy getting back to the blog as soon as I can!
Posted by Bill at 08:49

A fantastic day's work guys - well done again! I'd hoped to get down to see you but other things got in the way. Never mind - GWR induction this Sunday, so hopefully I'll get to actually work with you next week!

I must say that it was extremely thoughtful to have a visit from Teresa Ceesay, NR Cotswold Line Station Manager (Sorry if I got the name incorrect), and her colleague.

She took the time to introduce herself to the various 'working groups' and spent a few minutes chatting on pertinent issues.

The visit was greatly appreciated.

I agree, it was really nice of her and her colleague to take the trouble of introducing themselves and finding out what each group was doing.

It's great that they took the trouble to come and visit us to see what we are doing (and left suitably impressed). She also said that she had a few "items" in store for us for when the station opens!

The new Broadway Shed looks good but I hope you have got it and the other containers/sheds& huts insured. It's a sign of the times that as soon as anything of value is erected the anti-social element in our society want to either break into it, steal from it or burn it down.

But this is BROADWAY, my dear. Such things simply do go on in this genteel haven!

No but, seriously, the only anti-social behaviour I have witnessed (so far), is the repeated defacing of the polite notices we put up, concerning use of the path that runs alongside the site for our future car park, about the necessity for closure during some clearance operations, etc. The path is NOT a public right of way but dog-walkers and the like have used it as such for years. They fear losing the use of it, which I understand is unlikely.