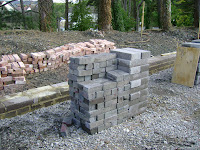 The elite squad were in today! Two major activities were completed. In no particular order, a large number bricks were move by Dumper from the brick cleaning area at the North of the site down to Platform 1A. 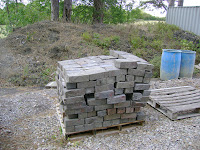 The Dumper was loaded at least 8 times and the bricks stacked ready for brick laying on Wednesday. At least 1000 bricks were  picked up and re stacked. On a parallel  activity Andy P forwent his chain saw and delved in the south west embankment and retrieved 201(he count them out and counted them in!) near pristine blues. 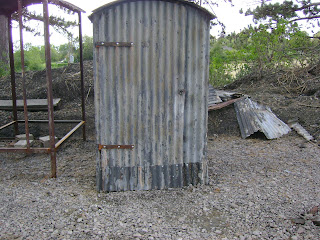 On the other Western Font also John Simms finished off the re fabricating of Lamp Hut No.1 and its now sufficiently smart for weekend campers.

Had a welcome visit from Graham Smith (Master of the local Roadmaster) who donated his SDS Breaker to the cause. Graham works hard on behalf of the Railway and knows all their is to know about "local" Broadway. Thanks Graham.

John Balderstone and Bernard Dudfield called in by also and as a new boy I always end up a bit wiser for their  advice, solicited or not! Cheers gents!

PS Jim, the lads couldn't find that mile post - they were very grumpy!
Posted by Bill at 20:42

Hi Bill,
It's a GWR boundary marker dtd 1905. Go through the gate and diagonally across Childswickham Road to a wide gap, with a "Footpath" sign (DON'T go under the bridge, the entrance is on this side)! In front of you, you'll see a stream with a concrete beam across it - DON'T go over it!
Instead, turn right, into the undergrowth, on this side of the stream and, by a couple of trees, the observant will see some rusty old cast-iron, laying on the ground, in the shape of a cross (probably made of old broad-gauge rail (the GWR didn't waste ANYTHING)!
At the other end of this object (approx 4'), you'll find attached, the round boundary marker.
Bring it home!!!!